Why are men and women smoking cigarettes while serving in the military?

Reporter: “So you were in WWII and you smoked? When did you actually start smoking?” 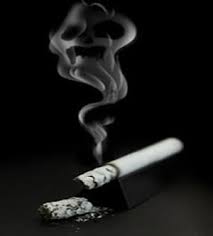 CDR Minnich: “I served in WWII, at the end, aboard the U.S.S. Pine Island (AV12) in Antarctica, in 1946. I started smoking before I joined the Navy at age 17. At enlistment, I was up to about half a pack a day – they were Camels. In Hawaii, around 1951 – 1952, I quit cold turkey, mainly because I was on the swim team and going to the gym. In 1955, though, I began again, and increased how many I smoked due to my stressful job in engineering – running the plant on the ship. Over time, I was on three different destroyers, and got up to smoking two packs a day.”

Reporter: “And how about when you were in Korea and Vietnam?”

CDR Minnich: “I was in Korea around 1950, on a ship headed to the Philippines. I got stationed at the American Embassy. I was smoking a pack a day then – Camels, no filters. I was then stationedon USS Genesee, a gas tanker, which had a crew of about 80, of whom at least 60 percent smoked, and they were all pack-a-day smokers. Smoking was never allowed on deck, only inside. I was commissioned (as officer) in 1955.

I quit smoking in 1963 in Washington, D.C., while on shore duty. At that time I was smoking two and a half packs a day, but I quit cold turkey. After that, I never smoked again.”

Reporter: “What about smoking on the ship and on land, isn’t it a hazard that would give away position, from the heat, the smoke, the light from the lit end?”

CDR Minnich: “The Navy has what is called a ‘smoking lamp,’ which signifies when the crew can smoke and when they cannot.

Reporter: “How do the military get their cigarettes?”

CDR Minnich: “Oh, well, cigarettes are pretty easy to come by, I mean, they’re at the bases, at ports and in towns, where they were pretty cheap, and just about everywhere.”

Posted by tobaccoprof on January 25, 2013 in Tobacco Articles

Africa is Big Tobacco’s last frontier, and companies are conquering the continent stick by stick. Even a child can afford the cost of a single cigarette, 16 cents for Moyana’s cheapest brand. 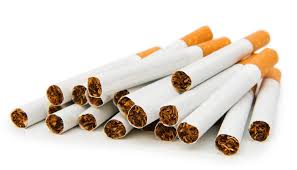 South Africa has some of the toughest regulations on the continent. Unlike in the United States, though, where the sale of packs with fewer than 20 cigarettes is prohibited, selling cigarettes single, or “one-one,” is not specifically banned here.

Tobacco use is declining in the developed world. It’s reached a plateau in the strongest market, Asia. But it is growing in Africa, because of the continent’s booming population and rapidly expanding middle class.

“This is a major battleground,” says Yussuf Saloojee of South Africa’s National Council Against Smoking. “The African population is very young. If they can hook customers now, they’ve got customers for the next 40 or 50 years. So the prospects of an increasing market share are very good.”

Posted by tobaccoprof on January 22, 2013 in Tobacco Articles

The Imperial Tobacco Group, the maker of Davidoff cigarettes, has announced that its group marketing director, Roberto Funari, will leave the business on January 30.

Funari joined Imperial in 2010 and has been responsible for the strategic development of the group’s brand and product portfolio worldwide.

His successor is being recruited externally, a process that is said to be well underway.

“I’d like to thank Roberto for the contribution he’s made to the success of our sales growth strategy,” said chief executive, Alison Cooper.

“He leaves group marketing in a strong position and the team will continue their focus on building consumer insights and developing innovations to drive the long-term growth of our total tobacco brands.”

Posted by tobaccoprof on January 9, 2013 in Tobacco News

Japan Tobacco Inc’s domestic cigarette sales volume during December, at 10.3 billion, was down by 4.5 per cent on its December 2011 volume, 10.8 billion, which itself was increased by 10.4 per cent on that of December 2010, according to preliminary figures issued by the company today.

JT has suffered huge volume swings in recent times because of an unprecedented, mainly tax-driven price hike on October 1, 2010, and the massive disruption caused to the company’s manufacturing and distribution operations following the earthquake and tsunami of March 11 2011.

Posted by tobaccoprof on January 2, 2013 in Tobacco News